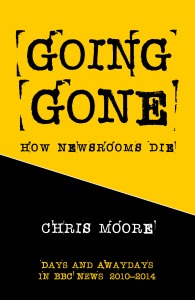 No one is quite sure if our extinction was a full-tilt tragedy but it was certainly a crime and we know who did it.

‘The World Service newsroom used to have a commitment to accuracy so extreme it touched on the absurd. The story goes that one duty editor refused to report on a fire in the Strand which he could see with his own eyes until it was confirmed by Reuters … But much of its output today consists of scraps offered by domestic journalists – a source of contamination in Moore’s words – who consider the World Service a waste of their time … He is furious that the senior executives who dismantled the best aspects of the World Service were paid so much while having so little to offer … Even his strongest critics will enjoy the splendidly intemperate emails to Mark Thompson, Alan Yentob and their ilk in which he set about the hopeless task of urging them to fly economy.’
– The London Review of Books.

‘Moore never forgot why he was proud to be a senior editor in the greatest newsroom in the world. “Thinking about foreign listeners every time we write a story,” he noted, “is how we have been trained to see the world, in translation.” He felt he had a duty “to recognise the kernel of significance in an event and to transmit it on radio using plain English.” Some colleagues found his purist ideas a touch extreme. Others recognised them as a bedrock for their journalism.’
– British Journalism Review.

THE HOARSE OATHS OF FIFE

Greg Dyke, My Part in His Downfall

Click here to buy this unexpected bestseller on Amazon.

Sequel to the bestselling Greg Dyke: My Part in his Downfall. Different boss, same can of BBC worms...